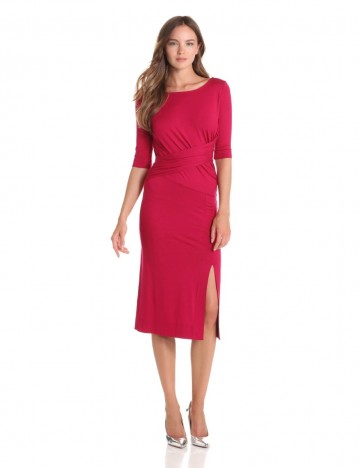 Its unique design and beautiful color will fetch a lot of second glances as you club it with silver colored pumps and silver clutch. Simple and sophisticated, this dress in an all rounder for all occasions.
95% Viscose/5% Linen
Dry Clean Only
Made in Italy

Why to buy?
Simply gorgeous is what you will be once you wear this cyclamen color dress from Vivienne Westwood.

Vivienne Westwood is one our greatest fashion designers. She is famous for bringing punk and new wave to the mainstream. Vivienne Westwood was born Vivienne Isabel Swire in Glossopdale, Derbyshire, way back in April 8, 1941. Her father hailed from generations and generations of shoemakers, while her mother had a weaving job in the cotton mills that was located locally. Growing up exposed to the basics of fashion can certainly be credited as attributes to Westwood's firm grasp of fashion sense.

It was in the 1950s when Westwood starting making her own design, as a teenager. She actually customized her uniform for school to come up with her very own design of a pencil skirt. Since then, Westwood started conceptualizing her own designs for her clothes. But 1965 saw a pivotal point in Westwood's life. It was during this time that Westwood met Malcolm McLaren, and both immediately formed a partnership that was going to be dubbed as one of the most creative collaborations in the industry of fashion ever. That partnership lasted for roughly 13 years, from 1970 all the way through 1983, and this saw the launching of Punk. This particular style was epitomized by The Sex Pistols, one of the prominent punk rock bands to have formed in the music industry ever. At the time, punk clothes did not come as cheap clothes at all. But the collaboration of Westwood and McLaren brought forth more punk clothes that could be bought at relatively lower prices.

Dame, fashion goddess and business maven, Vivienne Westwood is a living legend. Her quirky yet sophisticated image introduced looks from new wave and punk into the fashion and cultural mainstream decades ago. Today, she is one of the most recognised and sought-after fashion designers in the world.

From humble beginnings as an art student in London, young Vivienne became enamoured with the burgeoning punk movement which began in the 1970s. Her fashion and style drew inspiration from the reckless abandon personified by early punks. She mixed unusual fabrics and asymmetrical cuts to create looks which in time would take her to the top of the fashion world. Now a fashion establishment, Westwood has expanded her line considerably. While here women's line is of course popular, Vivienne Westwood shoes, accessories and handbags are also a hit. Often less expensive than the dresses, Vivienne Westwood shoes are popular due to their unique use of colour and materials.

Vivienne Westwood is known for her revolutionising British fashion with her punk and new wave designs sold from her shop in Kings road from the seventies. Her designs were outrageous and also incorporated more traditional elements of British style such as tartan. Her punk style became popular after the sex pistols wore clothes from her shop for their first gig. She also had close links with the Sex Pistols through her partner Malcolm McLaren, who later became the manager of the sex pistols and whose shop she first sold her designs through.  She still owns and sells clothing from the original Kings Road Shop which is now called Worlds End. Vivienne Westwood was awarded an OBE in 1992 and has received Designer of the Year accolades twice.

In 1970, Malcolm and Vivienne opened a shop on 430 King's Road in London called Let It Rock. They sold clothing targeted at the London Teddy Boy scene. Vivienne designed clothing for the store. The shop eventually went through a few incarnations. In 1972, the store became Too Fast to Live Too Young to Die and featured t-shirts with provocative slogans, leather clothing, and garments with zippers and chains. In 1974, the shop transformed again. It was called Sex and featured S&M clothing. Sex became synonymous with the punk scene. Then the shop became Seditionaries. Today, Vivienne Westwood's World's End iconic boutique carries her limited edition special clothing, shoes, and accessories.

After decades of continued success in the very fickle fashion industry, Vivienne has achieved an iconic status that very few people experience. Breaking through cultural and social norms, she brought a tough and wild image to the public and was received with open arms. In 30 years she has gone from dressing punk rockers to princesses and has also been the subject of an art exhibit at the prestigious Victoria and Albert Museum in London. A pioneering force in fashion and business, the Vivienne Westwood brand is sure to remain a staple in fashion houses for years to come.

Vivienne Westwood has certainly established quite a strong foundation in her own right. But this has not been easy for her at all. For decades and decades, Westwood has done so much to garner this strong reputation for herself. For starters, she co-founded the punk style in the international arena of fashion. She has also managed to work with a lot of big names in the industry over the years, too. What's more, she has also bagged a number of awards for Best Designer of the Year. A short glance at her credentials would clearly show you the reason why she remains at the top of the list of fashion designers, in spite of her age, having hit the prime of 66 already.

One of Britain's most iconic fashion designers, Vivienne Westwood has designed for several high profile clients including British royalty -The Duchess of Cornwall wore Westwood to Royal Ascot in 2009. Princess Eugenie wore 3 different Westwood outfits during the wedding celebrations of William and Kate in 2011. In 2008 her designs were featured in the Sex and the City movie. The character Carrie Bradshaw wore a fairytale Westwood gown to her wedding.

Studying fashion and silversmithing at the University of Westminster, Westwood left after one term saying "I don't know how a working class girl like me could possibly make a living in the art world" She then took up a factory job and trained to be a primary school teacher. It was during this time that she designed and created her own jewellery and sold it on a stall in the Portobello Road.

Open the history book. If you can see your past, then you can create a captivating future. Get a life! Master meaning! Refine your vision with the enthusiasm of elegant English excesses! Transform into a captivating creature and inspire your individuality with the alluring aphrodisiac of the Vivienne Westwood Anglomania collection! The Vivienne Westwood Anglomania collection is always a cut above the rest, timelessly tailored for thrilling temptresses!

Vivienne Westwood is provocative, awe inspiring, avant garde, unique, rebellious, and a true original. When you own a garment by Vivienne Westwood, you own a piece of art that stands the test of time. Vivienne Westwood studied the tailoring techniques of historical garments using time-honored techniques to brand her own interpretation of style. Her self-taught, unique vision brings a passion of living and exciting feminine expression into her garments. Vivienne Westwood's Anglomania women's clothing line is known for its asymmetrical cuts and delightful draping techniques which masterfully transform the body into an eye-catching art form. The Vivienne Westwood Anglomania collection includes dramatically desirable dresses, jackets, sweaters, suits, trousers beautiful blouses, tempting tops, captivating coats and sensational skirts. Vivienne Westwood masterfully accentuates the allure of the feminine figure through her gorgeous garments. She breathes life into the cloth and masterfully manipulates masterpieces through her draping and cut of the cloth on the feminine figure transforming the wearer into a beautiful creature.

The Vivienne Westwood design is a unique creation of quality and style. She works hard at her designs in order to make women look and feel magnificent. Her watch collection completes and finishes an outfit. In the words of Vivienne "I am not trying to do something different, I am trying to do the same thing but in a different way"

At present, Vivienne Westwood has turned her attention to a more toned-down look, which includes cufflinks and premiere silk ties. Nonetheless, Westwood's charm and wit are still very much visible in her silk ties. Even at 70, Westwood shows no signs of letting up. Her latest collection has been a hit on the runways and in stores. Filled with greys, dark blues and black, the 2012 collection evokes a powerful image. On the runway, the looks pay homage to distinctive looks in the past with references to Victorian England and Japanese Geisha girls. Models were adorned in dark makeup and teetered upon high Vivienne Westwood shoes while strutting down the walkway.

Vivienne believes that fashion is a combination and exchange of ideas between france and england; on the english side we have tailoring and an easy charm, on the french side that solidity of design and proportion that comes from never being satisfied because something can always be done to make it better, more refined.

Vivienne Westwood collections include four women's lines: Gold Label, Red Carpet, Red Label, and Anglomania. She has a men's line appropriately titled MAN. She also has a World's End line that features her classic pieces from the Vivienne Westwood archive. Vivienne Westwood also designs a collection of bags, shoes, sunglasses, eight perfume lines, and has multitude of stores all over the world!

"You have a much better life if you wear impressive clothes." - Vivienne Westwood.