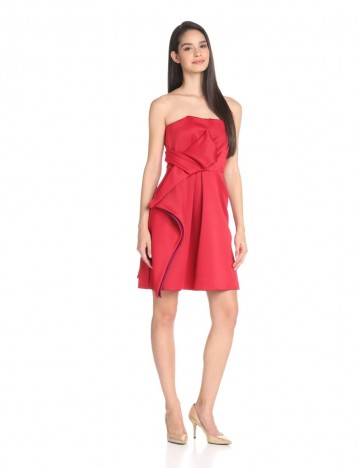 Steal the show in glamorous piece like this strapless cocktail dress.This stylish crimson/boysenberry color dress features polyester material. Illusion of a bow draped into skirt with corset inside and side zip closure, completes the look of this stunning dress

Why to buy?
You'll be set for work or play when you've got one of this strapless dress in your wardrobe, this dress is comfortable and perfect for any occasion.

The Halston Heritage label takes the best of 1970s disco glam and merges it with a modern sensibility for chic retro looks that are perfectly in the now. The line, an offshoot of legendary American design house Halston, was introduced in 2009.

Roy Halston Frowick was the creator of luxury fashion in America, whose groundbreaking designs still influence and inspire us today. Founded in the 1960's, the Halston label took the fashion industry by storm. Known as the Father of Minimalism, Halston used his signature materials to reinvent the jumpsuit, the shirtdress, and the caftan, permanently leaving his mark on fashion. His legacy lives on as a new team of innovators continue to evolve the Halston brand through the HALSTON HERITAGE collection. The 1970's and the era of Studio 54 became synonymous with Halston's designs. Soon after, he was named 'The premier fashion designer in America" by Newsweek. His strong connection to pop culture was evident by his friends and clients, which included Andy Warhol, Bianca Jagger, and Elizabeth Taylor. Halston created strong codes that are quintessential to the brand even to this day.. The line is sold in some of the world's most formidable department stores including Neiman Marcus, Bergdorf Goodman, Saks Fifth Avenue and Harvey Nichols, among others. One of the most successful fashion entrepeneurs in history.

After rising in the fashion world in the sixties as a milliner for Bergdorf Goodman (and, famously, Jacqueline Kennedy), Roy Halston Frowick launched his eponymous womens wear label in 1968, buoyed by his connections with socialites and celebrities. The label is noted for its luxurious but minimalist, modern designs, like heavy weight cashmere evening dresses, ultrasuede wrap coats, and simple jersey sarongs.

In its heyday, the label was known for A-list clientele including Lauren Bacall, Bianca Jagger, Liza Minnelli, and Liz Taylor. Newsweek dubbed Halston "the best designer in America" in 1972.

He designed his first dress, a dark jade velvet wedding gown, for advertising legend Mary Wells Lawrence. Mrs. Lawrence was married to the CEO of Braniff Airlines, Harding Lawrence. She would be instrumental in bringing Halston to Braniff in 1976 to design the Braniff stewardess's, pilot's, ticket agent's, and ground personnel's uniforms.