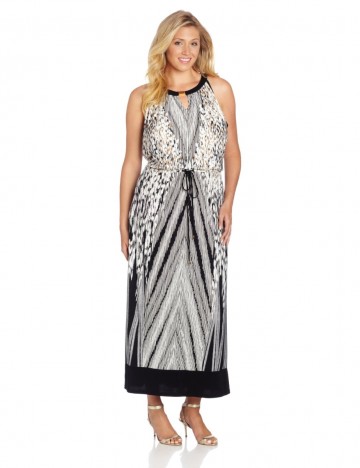 An animalstic print interrupts the geometric lines of this sleeveless maxi by Calvin Klein.
Its keyhole neckline and drawstring waist draws attention to your neckline, and it contains 95% polyester and 5% spandex to ensure a comfortable fit.

Why to buy?
Look stylish and comfortable in this plus-size maxi dress.

Calvin Klein, Inc., one of the leading fashion, design, and marketing studios in the world today, began in 1968 when Calvin Klein and a childhood friend first opened a women's coat business. Klein's work quickly earned him widespread recognition. The clean lines and spare shapes of his designs caught the attention of the press and retail executives alike, and the brand continued to expand its reach.

Calvin Klein Collection is the most prestigious and refined brand within the Calvin Klein portfolio, setting the tone of elegance and luxurious simplicity for the company's other brands. Calvin Klein Collection represents a sleek modernity characterized by immaculate finishing and tailoring with rich materials and sensual fabrics. In addition to the brand's ready wear line, which is shown each season on the runways of New York and Milan, Calvin Klein Collection also offers men's and women's shoes, eyewear, handbags and other accessories.