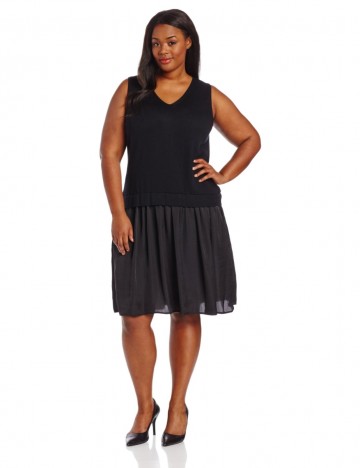 Get in touch with your feminine side by wearing this black colored dress from Calvin Klein. Made from 76% rayon and 24% wool, this beautiful dress is high on comfort and lightweight. It features luxury loungewear and sweater or woven mix to accentuate your look. This sexy dress can be best teamed with matching sandals and a clutch.

Why to buy?
Stow away your old stuff wearing black coloured dress from Calvin Klein. Made of premium quality rayon and wool blend, this dress is high on comfort.

Calvin Klein Collection is the most prestigious and refined brand within the Calvin Klein portfolio, setting the tone of elegance and luxurious simplicity for the company's other brands. Calvin Klein Collection represents a sleek modernity characterized by immaculate finishing and tailoring with rich materials and sensual fabrics. In addition to the brand's ready wear line, which is shown each season on the runways of New York and Milan, Calvin Klein Collection also offers men's and women's shoes, eyewear, handbags and other accessories.

Other Products for Gift in Similar Price Range and CategoriesView More »