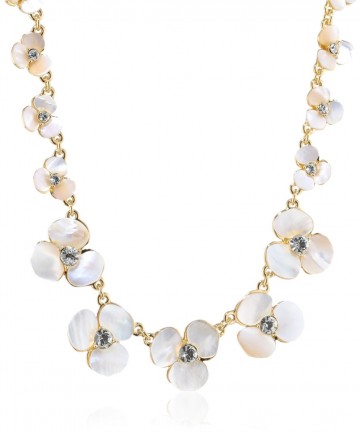 Stand out at your next dinner party or special event with this beautiful necklace, this piece features a highly polished finish for a glorious shine, and a lobster-claw clasp keeps it secured, Adorn your neck with this stunning necklace from Kate Spade New York. Items that are handmade may vary in size, shape and color.

Why to buy?
Complete your outfit with this elegant "Disco Pansy" single strand short necklace. This beautiful flower necklace by kate spade new york will make any outfit more elegant.

Kate Spade, born Kate Brosnahan on December 24, 1962, became an unusual success in the designer handbag genre, a field normally accredited to the affluent. Following attending all girls St. Teresa's high school, she attended Arizona State University, then in 1986 was employed at Mademoiselle Magazine's accessory department. There she worked up to become the head of the department, and left there in 1991. She influenced women to trade their boring "little black bag" for a more stylish purse, and spent hours investigating fabrics, styles, and the cost of producing elegant purses.

In 1993, former magazine accessories editor Kate Brosnahan created a sleek black handbag under the label kate spade new york that became famous around the world. In 2007, Deborah Lloyd, formerly of Banana Republic and Burberry, took the helm as president and chief creative officer with an aim to broaden the line while honoring its history. Craig A. Leavitt joined shortly thereafter to realize the global potential of the brand that now has dozens of retail shops, a thriving e-commerce business, and boutiques around the world and has grown to include shoes, jewelry, fragrance, eyewear, hosiery, tabletop, paper, and women's ready-to-wear.

Celebrate twenty years of all the things we love about Kate Spade New York in 2013. From the simple sophistication of the very first Kate Spade bag in 1993 to the captivating cornucopia of items available today, it's easy to transform a wardrobe from woebegone to wickedly wonderful in a flash!

With handbags, small goods and tech accessories for every conceivable event, the Kate Spade New York woman is awash in a sea of welcome choices for occasions ranging from the weekend farmer's market to a positively bewitching evening engagement. It's easy to recognize the intrigue, glamour and striking beauty of a Kate Spade woman from near and far.

With a little twirl and click of her heels, the Kate Spade New York woman is off on another tour of fashionable duty, seeking out the hidden treasures of the world, one thrilling day at a time.