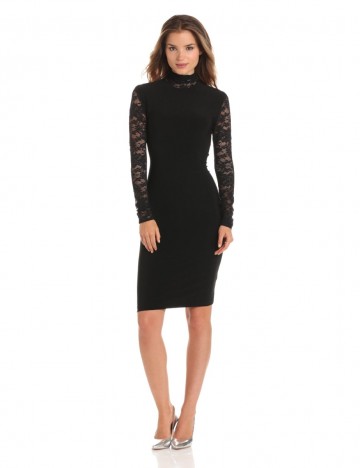 KAMALIKULTURE Turtleneck Combo Dress To Knee For Women
from amazon

Why to buy?
A classic turtleneck dress with lace sleeves and collar will make this a staple in your fall wardrobe.

Norma Kamali has always been known as a designer who follows her own path. She has since designed collections for her own brand as well as collaborated on lines such as Walmart, Everlast and Spiegel. Norma Kamali is known for inventing styles that have influenced a number of trends through the years, from the iconic “Sleeping Bag Coat,” the high-heeled sneaker, clothing made from actual parachutes, and influential swimwear. She also introduced the idea of wearing sweats from the streets to eveningwear and more.

A native New Yorker, Norma Kamali is a graduate of Washington Irving High School and received a Bachelor of Fine Arts from the Fashion Institute of Technology in 1964. Four years later (1968), she opened her first boutique in New York, featuring her first designs made with elaborate appliqués, lizard and leather patches, snakeskin and tee shirts with rhinestone studs.
In 1976 Kamali opened a shop in Los Angeles and created her I Love New York promotion for Madison Avenue retailers. The following year (1977), she introduced her first wholesale swimwear collection and a Cosmopolitan cover featuring one of her bikini designs, which created an international demand.
In July 1978, Kamali opened her own business and retail store OMO (On My Own) Norma Kamali. In the same year she designed the costumes for the Emerald City scenes of Sidney Lumet's film The Wiz. That same year, Diana Vreeland included Kamali’s parachute designs in her Vanity Fair exhibition at the Metropolitan Museum of Art, where they are now in the museum's permanent collection.
Other Products for Gift in Similar Price Range and CategoriesView More »