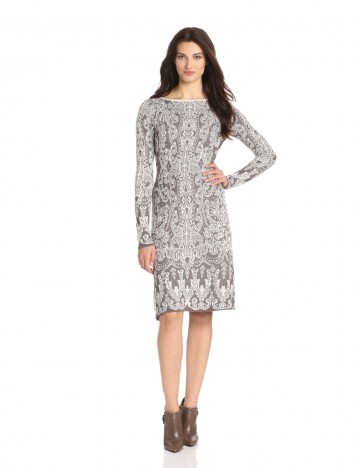 Double your fashion flair as you wear this top in grey combo color from BCBGMAXAZRIA. Fashioned using 70% silk and 30% rayon blend, this dress will keep you at comfort all day long. Featured round neck, long sleeves, allover two-tone jacquard floral lace pattern and a-line skirt. This beautiful creation will give you a trendy look when clubbed with matching pumps.

Why to buy?
Slip into this soft, simple silhouette for an instantly artful touch any day of the week.

Founded in 1989, BCBGMAXAZRIA is the creation of renowned fashion designer Max Azria. After years of success designing women’s wear in Paris and Los Angeles, Azria decided to pursue his dream of launching a design house that spoke to the modern woman. With the creation of the BCBGMAXAZRIA brand, he redefined the designer category by offering high-quality, on-trend clothing at contemporary price points.

BCBGMAXAZRIA began with a single idea—to create a beautiful dress. Today, they are one of America’s leading design houses, with a collection that includes evening and cocktail dresses, sportswear separates,handbags, footwear, and accessories. Designs are focused on fit, construction, and fabrication, and each piece represents the luxury, visionary viewpoint, and integrity of the brand itself.

Always on the forefront of fashion, the BCBGMAXAZRIA woman is known for her sense of style. She appreciates clothes, shoes, and accessories that are elegant as well as wearable. Her confidence is apparent in her attitude and flair for fashion. From clutches to sandals, each piece in the collection embodies the timeless spirit and chic sensibility of the woman who wears it.

BCBGMAXAZRIA knows that the one thing that makes a woman look her best is confidence. In BCBGMAXAZRIA clothes, shoes, and accessories, every woman feels like she can conquer the world with style.